Over the past years, the debate around sexual and gender-based violence has caught the public’s attention, with movements such as #MeToo, #NiUnaMenos, or #BabaeAko (I am a woman) in the Philippines. Crimes such as the death of a 16-year-old Argentinean girl, after being drugged, raped and tortured, and the gang-rape of an 18-year old Spanish woman during the running of the bulls festival in Pamplona, have sparked outrage not only online, but also on the streets, with millions mobilizing.

Femicides and sexual violence are probably the acts of violence against women that are most mainstreamed, but they are just the tip of the iceberg. Even the most trivial tasks in our daily lives reflect the structural oppression that women face. Is it not violence against women when despite being the main food providers in the household and producing half of the world’s food, it is women who are the ones suffering most from hunger and owning a disproportionally small piece of the world’s land? The International Day for the Elimination of Violence Against Women marks an occasion to look into how oppression starts with the most basic thing in our lives: food.

In the recently launched “Women’s Power in Food Struggles”, around 30 women from all regions in the world looked at the nexus of women and food – and found violence to be a common denominator. Women’s experiences are shaped not only by their gender, but also by other factors such as class, caste, ethnicity and sexual orientation, yet all women face various types and degrees of violence. And the way we work, eat, produce and distribute food is part of the problem.

From growing produce, to processing, transporting, and consuming food, women play a pivotal role in food systems and economies. However, paradoxically, their roles and specific needs remain hidden from the general public eye, due to sexist ideas and practices. Out of the 820 million affected by hunger, women are the worse off, and even more so if they live in oppressive societies under exploitation and violence.

The dominating economic system and current political climate are exacerbating this. Across the world, rising authoritarian right-wing governments are promoting restrictive abortion laws and other policies that limit women’s reproductive rights and political agency. Racism and discrimination have led to less access to social services and increased poverty and food insecurity among migrant women and women of color. Indigenous and peasant women and communities are violently dispossessed from their territories in order to pave the way for mining and agribusiness.

At the same time, corporate power continues to expand by heavily relying on unpaid household and care labor assigned to them due to their gender. This goes from caring for family members, cleaning and cooking, to fetching water and fodder. In cases of drought and food shortages, exacerbated by climate change and eco-destruction, women have to travel longer distances to find supplies for their families.

Despite all this, a key point must be made: women are not merely victims of violence, they are actively reshaping reality worldwide. They do so while continuously having to fight against the belief that politics is only for males. They are confronting authoritarianism, and self-organizing in the streets, their communities, and at global food governance spaces.

In Brazil, the Marcha das Margaridas (March of Daisies) is held every August since 2000, as the most massive action of working women from the countryside against agribusiness violence. In Northern Syria, in Jinwar, women have created a village - currently under threat - free from the constraints of the oppressive power structures of patriarchy and violence. In Mali and India, women and gender non-conforming individuals are producing food in a way that is transforming both gender relations and our relation with nature. These are inspiring cases.

If violence is central to current food systems, then building new relationships between genders, within communities, and towards the environment becomes a crucial step towards transformation – and women across the world are doing just that, as the examples above illustrate. On this day, let us raise our voices to engage in collective action and join this struggle, which despite missing in mainstream media, can make a difference for all women. 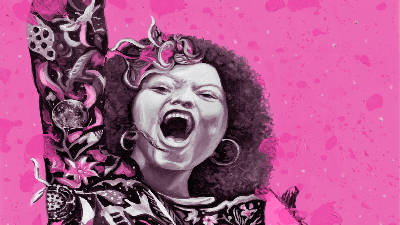