According to estimates, the projects will destroy the livelihoods of at least 40,000 farmers, agricultural workers and fishers. The planned projects are being carried out in disregard of the Indian legal framework and international human rights obligations and without the consent of the affected communities. Most of the land required is officially classified as forest land - and thus actually exempt from rezoning for other purposes. Although environmental clearance is still pending, construction work has already begun: Valuable sand dunes have been damaged and hundreds of thousands of trees have been cut down. Villagers are also subject to state violence, arbitrary arrests and increasing criminalization.

The frontline communities demand that the Indian national government, the relevant ministries and the state government of Odisha immediately withdraw the police forces, restore freedom of movement and withdraw the cases against protesting villagers. Furthermore, they demand the immediate processing of the forest rights claims that have been enshrined in law, as well as the renewed implementation of the procedures required under the environmental impact assessment. In addition to compliance with the Covenant on Economic, Social and Cultural Human Rights (especially the right to food), all of India's commitments under the Convention on Biological Diversity, the Paris Agreement on Climate Change, and the Sustainable Development Goals (SDGs) must be implemented. 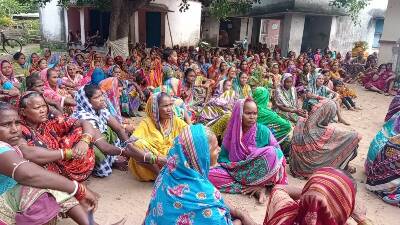